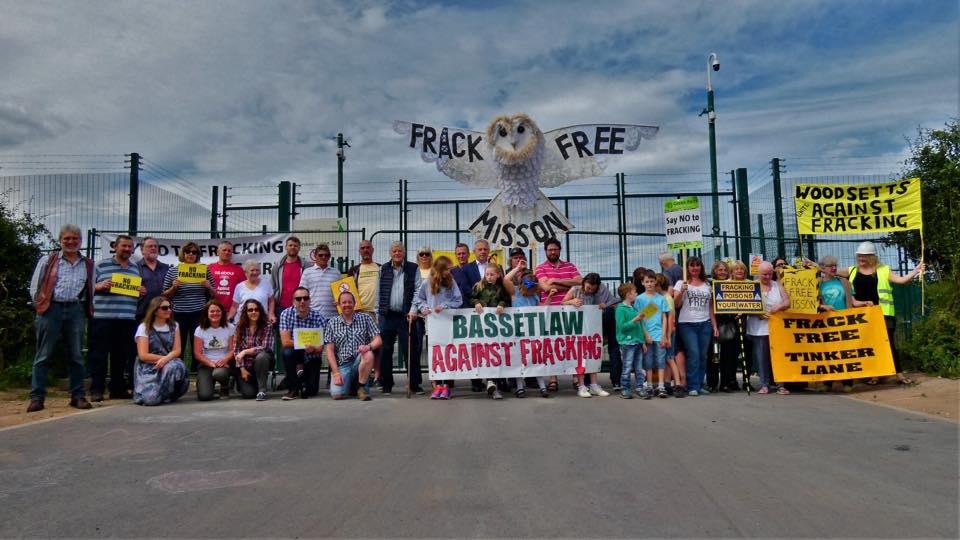 As the fracking industry marshals its forces for intensified assault on communities across the British Isles, here is a look at the current state of the threat across the country and what the industry is planning in the coming months.

How we got here

The last decade has seen an explosion in oil and gas drilling as conventional, easy to extract, hydrocarbons have become harder to find and the system has been forced to resort to new more aggressive extraction techniques. While oil prices are currently well below their 2008 peak, and new drilling has been stalled in many places, this hasn’t stopped preparations for continued expansion once prices rise again. The industry is busy gathering geological data with the intention of securing further investment, and with oil prices now creeping upwards are preparing for another boom period, with its attendant wave of ecological destruction.

Serious attempts to push fracking in this country began (mostly under the radar) around the 2007/2008 peak in oil prices, as various companies saw a chance for a quick buck. The fallout of Cuadrilla’s infamous earthquakes at Preese Hall in Lancashire in 2011, and the community resistance which has mobilised since then, has seriously affected the fracking industry’s prospects. Since 2011 drilling of onshore exploration wells in the UK has fallen by two thirds and that shows no sign of changing in the near future. However, while many companies have pulled out, and others taking a back seat for now, a hard core are slogging forward.

Unconventional oil and gas extraction, colloquially referred to as fracking, covers a broad range of more extreme hydrocarbon extraction methods targeting relatively impermeable rock formations. This includes shale gas, tight/shale oil, tight gas, coalbed methane (CBM) and underground coal gasification (UCG). While these methods differ greatly in technical details, they are all driven by similar pressures and have similarly intense impacts. Over the last decade or so we have seen significant attempts to push forward all these methods, but in the face of growing resistance and unstable prices the more speculative or less profitable methods, UCG and CBM, have been deprioritised.

But a new 14th onshore licensing round in 2014/2015 saw whole new swathes of the country licensed, with Ineos alone acquiring over a 1 million acres. With around 10 million of acres of the UK now licensed, communities are under threat from the industry like never before. Full-scale fracking in these areas would mean the drilling of many thousands of wells, at densities of eight wells per square mile or more, plus other fracking infrastructure like pipelines, compressor stations, processing plants and waste disposal facilities carving up the countryside. This would result in a host of severe impacts including water contamination, air pollution, massive amounts of toxic/radioactive waste and carnage on rural roads from the massive amounts of truck traffic.

While every area which has been licensed is under some sort of threat and many unlicensed areas could be licensed in the future, the threat is more immediate in some areas than others. Even people not living in these areas should be extremely concerned, as any new fracking foothold provides a spring board from which it could spread to other areas. These are some of the most important current front lines in the fight against fracking:

(Shale Gas) Fracking company Cuadrilla has taken the best part of 7 years to get back to where it was, following the 2011 earthquakes it caused in Lanacshire and the subsequent explosion of resistance to fracking. It has know drilled 2 of an orignally 4 planned wells at its Preston New Road (PNR) appraisal site, while its other new site at Roseacre Wood is having its planning refusal appealed in central government. A year and a half into activity at PNR the ongoing resistance is clearly taking its toll. Cuadrilla appears to be about 6 months behind its original timeline, even after having quietly scaled back its plans to two instead of the initial four wells. Numerous contractors have dropped out of the project as resistance has spread to various support sites. Cuadrilla is currently winding down its drilling operation and planning to remove the drilling rig from the site and bring on its frac pump set, and start hydraulic fracturing of the 2 wells. This new phase of activity, with increased flows of trucks equipment, chemicals, frac sand and waste, presents an opportunity to inflict further delays to the project, at great additional cost to Cuadrilla.

(Tight/Shale Oil) The threat of tight (shale) oil extraction in the Weald (between the South and North Downs) in Sussex and Surrey is now becoming critical. With fracking companies UK Oil & Gas Investments (UKOG) and Angus Energy acting as its main cheerleader, a series of wells have been drilled and tested at Horse Hill and Brockham in Surrey and Broadford Bridge in West Sussex. More tight oil tests are planned at these sites over the coming months, as well as at Balcombe where Angus has taken over as operator of the site from Cuadrilla. New wells are also planned at Leith Hill and at 2 undisclosed sites in Surrey/West Sussex. All this is targeting tight oil in limestone (micrite) layers within the Kimmeridge Clay shale, which would require
drilling thousands of wells to exploit. The Brockham site which has an existing planning permission for production is particularly worrying.

(Tight/Shale Gas) In North Yorkshire, as in Lancashire, the Bowland Shale (or tight sandstone formations within it) are the primary target, and companies are scrambling to try to exploit it. Cuadrilla and INEOS have recently acquired licences in the area, but an existing licence holder Third Energy has a head start, with planning permission for a hydraulic fracturing test on its Kirby Misperton well. However, the company is in some finacial difficulties and this has so far stopped it from satisfying certain financial conditions attached to get the final hydraulic fracturing permissions from the Oil & Gas Authority. Ineos are also busy trying to organise a seismic survey in their North Yorkshire licence areas, but are running into significant resistance from local people.

(Shale Gas) A major fracking push is also underway in North Nottinghamshire where IGas Energy (with the financial backing of Ineos) is threatening communities in Bassetlaw, and has constructed 2 sites at Springs Road in Misson and Tinker Lane near Blyth, and has plans to start drilling in the coming months. Meanwhile, Ineos has also has licences in the area and has identified 3 test site (Marsh Lane, Harthill and Woddsetts), although only Harthill has managed to obtain planning permission so far and a legal challenge may delay the start of work there.

(Shale Gas) – As with the East Midlands, IGas and Ineos are the main players at present. IGas has plans to return and carry out additional testing on the well it previously drilled at Ellesmere Port and drill a new well on its Ince Marshes site, but ha so far been refused planning permission as both. As with the East Midlands, Ineos has plans for seismic surveying across its new licence areas and this will reach Cheshire at some point. Ineos has also acquired a substantial quantity of fracking equipment (including five times as many frac pumps as Cuadrilla), asset-stripped from a Polish fracking company and is storing them at its Rocksavage chemical works in Runcorn.

In the second half of 2018 the fracking industry is planning a blitzkrieg of drilling and testing. Cuardilla’s much delayed and scaled-back plans at Preston New Road (PNR) in Lancashire are just the most high-profile, and advanced, of these projects. Hydraulic fracturing on the wells at PNR could begin in September, but tight oil testing in Sussex/Surrey at Brockham, Horse Hill and Balcombe over next few month could prove even more threatening. Tight oil has the potential to move from exploration to production much more quickly if not stopped, due to the lower cost of the shallower wells and ability to tanker oil off site to a refinary without building pipelines. The Brockham site which already has planning permission for production, is particularly worrying.

Attempts to start drilling at a number of sites including Springs Road and Tinker Lane in Nottinghamshire, and Leith Hill in Surrey seem imminent, and Ineos’s site at Harthill in Rotherham may not be far behind. Third Energy’s fracturing tests at Kirby Misperton are on hold for the moment, but a solution to Third Energy’s financial problems could change that very quickly. A number of other area of the country are under less immediate levels of threat from plans for drilling and testing. Finally Ineos is pushing hard to start its second round of seismic testing (after the East Midlands), in North Yorkshire, though it is increasingly having to resort to court action (including against the National Trust) in order to gain access to land.

It’s not just geological information that the fracking industry is interested in, “social data” on the economic risks associated with community resistance is needed just as much. This is where the anti-fracking movement has been extremely effective up until now. The fracking industry is responding by working with government to dismantle some of the tools communities have used to delay these projects. There are plans to allow test wells to be drilled without planning permission and decisions on larger projects to be taken by central government, bypassing more influenceable county councils.

The fracking fight is now moving into a new phase where causing physical delays and ramping up costs will hold the key to deterring future investment in the industry. Fighting on numerous small fronts, the currently 300+ local anti-fracking groups have been delaying and ramping up the costs of fracking projects, wearing down the opposition and deterring the investment on which the industry relies. After all these communities have little choice but to stand and fight. In the end this is a fight to the death, either the fracking companies get to coat the country in tens of thousands of wells or we drive them in to bankruptcy. There are no other options.