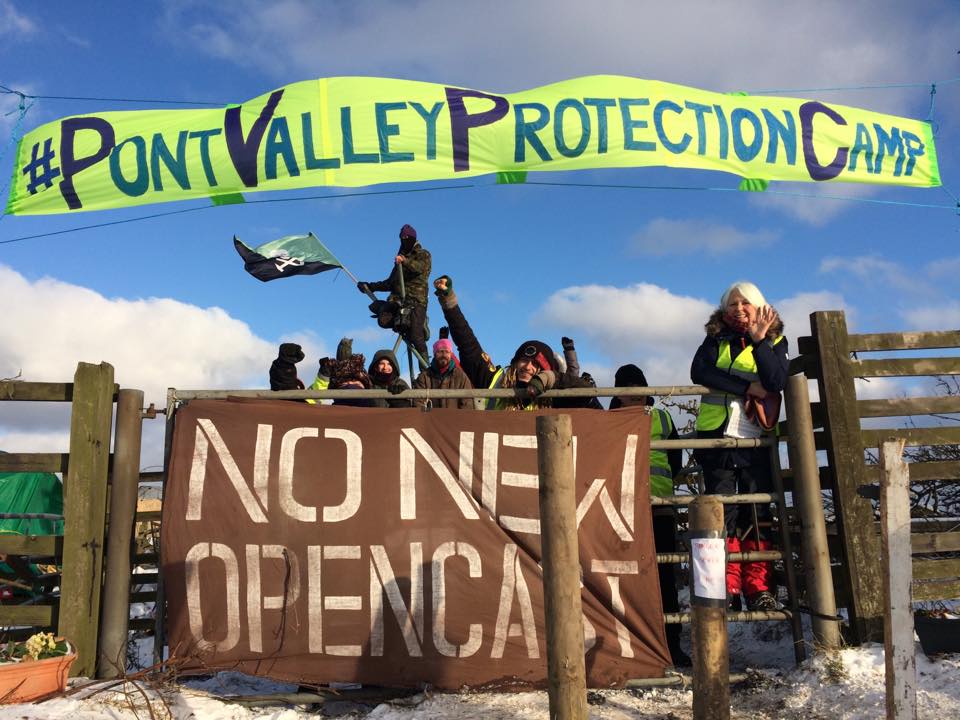 Time is running out for Banks Group to build an access road to the site of it planned opencast coal mine in County Durham, before their planning permission expires on 3rd June. Local people and their supporters have left to stop the first spade going into the ground on 71 hectares of grassland, fields and woods in the Pont Valley, Co Durham. Under planning permission, the mining company Banks Group has to start work by 3 June or their licence to start mining the site will expire.

The site is in the Pont Valley off the A692 between the villages of Leadgate and Dipton, where the Banks Group plans to extract around 500,000 tonnes of coal over two to three years. A camp was setup on 2nd March at the entrance to the proposed mine. Several Local Groups, the Coal Action Network and campaingers from Hambach Forest have been instrumental in getting the camp going. Between 19th and 21st April, the camp was evicted by bailiffs and seven campaigners were arrested, but a new camp has been re-established at a new location. All are invited to come and stay and protect the beautiful Pont Valley. There is local bus connections to Dipton from Durham and New Castle.

There are plans for a series of public demonstrations in the days leading up to the deadline, including:

For over thirty years, UK Coal and now Banks Group have wanted to start an open cast coal mine in the Pont Valley, between Dipton and Leadgate, at a site known as ‘Bradley’, in County Durham. The community won 3 high court battles against UK Coal. But they lost on the fourth despite presenting even stronger evidence than the previous 3. UK coal got the permit, but they were bankrupt and they liquidated in 2015. Everyone thought that was the end of it and there would be no mine. This January, Banks Group announced they’d bought the land and the permit off UK Coal and intend to work the mine.

If you would like to put an event anywhere in UK or in other parts of Europe to spread the word of the struggle please get in touch with: protectpontvalley@gmail.com