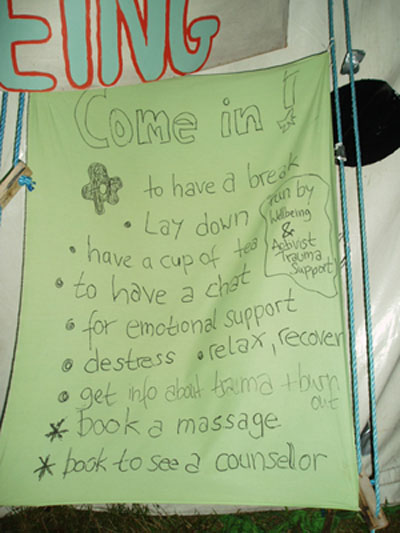 While Wellbeing in the mainstream society is mostly connected with saunas and mudpacks, we tried to give it a different connotation in activist circles. Personal wellbeing (while the word may sound quite fluffy to some, and while we were at first unsure about it, by the end of the Climate Camp it was obvious that it worked well) is about us. Itâ€™s about how we deal with the stress of organising and a lot of responsibility, it is about our physical wellbeing, about taking breaks, not becoming sleep deprived, it is about avoiding burnout and developing sustainable activism. It involves dealing with the fear and trauma caused by police confrontations, it involves learning to stay calm when there’s a lot of pressure on, and most importantly knowing your own limits and treating yourself well. Taking care of each other and taking care of ourselvesâ€¦.so that we can continue our resistances.

The wellbeing space at the Camp for Climate Action near Leeds in September 2006 was a taken on by a group in order to provide resources for the wellbeing of activists. In 2005 at the Camp in Stirling against the G8, Activist Trauma Support had run a Recovery Dome for people who had been traumatised or who felt they needed support. A lot of people used the space and we felt that it was successful and needed. However there was also the issue that it quickly came to be called the ‘Trauma Tentâ€™. This made it hard for people to approach, it being somewhat unclear what was available inside, and possibly some people feeling that maybe they only had the right to come in if they were traumatised.

We took these points on board. Also we had already started working more on burnout and sustainable activism, since it is a common problem amongst activists and has been nearly entirely neglected as a topic, despite the fact that it can have devastating effects. (See burnout flyer on our webpage).

We adjusted our concept and created a wellbeing tent at the camp. The idea was to provide a calm space, away from the Camp centre, but one not too isolated. A big sign at the entrance said: ‘Come in â€“ to have a break, de-stress, relax, have a cup of tea, talk to somebody, recover, book a massage or book a counselor.’ Our intention was to take the stigma and fear away and make it easier for people to come in. Inside we had three areas â€“ a reception with information material about trauma, burnout and how to deal with the police, tea making facilities and places to sit, a recovery area where people could have a lie-down, two more private spaces for body work and talking.

Furthermore we had a second smaller tent in the back, for more intense talking sessions and bodywork. The space was open from 11 to 24h, but staffed at all times for emergencies. We organised ourselves in shifts of 3 hours with 2 people for each shift, everybody taking on one shift per day. Altogether 15 people were involved in running the space, a core group and some satellites. We held daily group meetings of around 60-90 minutes, which made sure that there was a mechanism for debriefing, as well as a place for discussion, group bonding, updates and organising.

We also ran two workshops â€“ one on burnout and sustainable activism and another one on activist trauma and recovery (to book one of these workshops for your affinity group, contact us by email)

After the main day of action, some parents from the kids block approached us for a facilitated group debriefing and afterwards another debriefing, especially adapted, was held for the kids who had been on the kids block, â€“ maybe the first kids debriefing after a kids block action everâ€¦ It was very successful and we realised how important it is to approach groups and to offer a debriefing after an action or to give them guidelines on how to run one. Typically this is done in go-rounds, going into the roles people had and what they experienced, so that everybody gets a complete picture of what was actually going on. Then going into what people thought and felt, so there is a general awareness of each others emotional state and so that the brain can process the experience by talking about it. We decided that we need to be more proactive in approaching affinity groups and neighborhood meetings to offer this.

By also offering a space that key organisers felt comfortable using, while generally opening up the topic and making it easier for people to talk about burnout, there seemed to be a big change in the general atmosphere of the camp. A lot of the time people can work far beyond their boundaries and then they are out of the game for months afterwards. In this manner atmospheres can be created where taking a break is regarded as a betrayal. This atmosphere was questioned and started to change. People with a lot on came in, lay down for a while, got a massage, or just took time for themselves. This is harder than it sounds if you have a lot of responsibility and work and people come constantly running to you. It is hard to take a break and feel confident that things will also happening without you, maybe differently, but the world will keep turning. Giving importance to your own wellbeing enables you work to work more productively. You can enjoy more and you wonâ€™t be totally shattered for ages afterwards. Offering massages can be very helpful in this respect. This time we did not have enough people to cover demand adequately, and in truth we did not organise this area well enough, but at the same time a lot of massages were given to relieve the emotional stress and physical pains of hard work.

Since there was not a huge amount of police brutality, not as much trauma support was needed; but it was used by people who had been attacked by the police and also by people who felt stressed by the experiences of the day. That this is normal and not something to be ashamed of is part of the paradigm shift we are working towards. Talking about it, with somebody from wellbeing, or a friend, is an important step.

Fortunately people with so called ‘mental health issues’ also feel that it is safe for them to come to an action camp. In this sense the space and the support was used by people who had difficulty coping, or who had just stopped their medication. It was an advantage to us that our team was so diverse, in this way we could help with various different issues. Our age range is from 20 to 50 and includes psychologists, counselors, activists who have been trained in emotional support, body workers and social workers. We hope for a more integrative approach towards different states of mind inside activists’ communities.

Although the people working on wellbeing and Activist Trauma Support come from all over the UK, and some from mainland Europe, over the course of Climate Camp our group has become much more solid, with more people wanting to get involved and work on this. To build upon this we have decided to hold weekend meetings, 3 times a year, from now on, in order to give space for more in-depth work; rather than just working at camps and convergence centers.

Altogether the experience has been very positive. We got a lot of good feedback. Especially interesting was the point about the changes you canâ€™t see and measure â€“ how people think and talk differently, how it feels different to be at a place with a wellbeing space rather than at one with none. Some people said it was reassuring in its own way, like having a medic around, even if you might not need her this time. We are aware that there are probably various things we could have done better or differently. Please let us know if you have any feedback. BTW, we as individuals inside this group also keep learning what we preach, still struggling at timesâ€¦This is a learning process for all of us, the more people involved the more effective it will be. At this stage in that process, it felt really good to be part of the general political success of the Climate Camp, especially in the sense of fighting repression in ways that make our movements stronger and more versatile.

Contact:
If you have any feedback, criticism or ideas about our work and our presence at the camp or want to get involved please contact us. Â activist_trauma@riseup.net, Phone: 07962 406940
www.activist-trauma.net (with a database of people who offer support and trained counselors and psychologists (write to us to sign up if you want to offer your skills))
Â trauma_info-subscribe@lists.riseup.net (send blank email to receive irregular info (low traffic))